Given the tremendous amount of focus on income inequality these days and the common knee-jerk reaction to push harmful and counterproductive wealth redistribution policies as a palliative, it is timely and important that Mark Warshawsky of the Mercatus Center at George Mason University recently published a working paper exploring the largely heretofore ignored impact to earnings inequality of employer-based healthcare coverage as a component of total compensation.

The punchline is this: healthcare coverage costs have consistently risen faster than wages for most Americans over the past four decades. Given that healthcare coverage is relatively equal across the income ranges (it is roughly the same cost to an employer to cover a family of four in the lower 30th decile of earners as that of a family of four in the highest 10th decile of earners), rising healthcare costs will harm and encroach more grievously on the employer’s ability to increase take home earnings for lower income earners. In other words, increasing healthcare costs, even if growing at the same rate for lower income workers as higher income workers, will eat up more of a percentage of total compensation and restrain actual take-home earnings for lower income workers. Furthermore, most studies, including the high- visibility and high impact to public policy book by Thomas Piketty, Capital in the Twenty-first Century, have used after-tax earnings data to compare wealthy and poor, resulting in loud alarm bells on inequality. The impact? Politicians across the globe, including President Obama, declared income inequality the defining issue of our time, but based upon partially constructed data! Warshawky’s research more appropriately focuses on total compensation, which provides a more comprehensive assessment of what is going on, and in this picture is revealed a more tightly coupled growth between the income poles. This is not to say that inequality in earnings is not a problem we should address, it is more to say that policies to address it should focus on the actual cause – which is not the perceived ability of the wealthy to extract wealth at the expense of the poor, but a direct result of the pernicious impact of rising healthcare coverage costs that crowd out earnings growth for those in lower income categories. 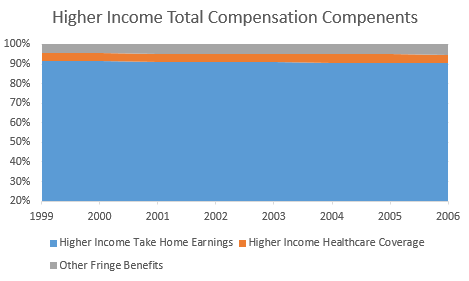 For anyone interested in a more fulsome review of the examples and scenarios I have created on top of Warshawsky’s values, I have attached the spreadsheet at health-care-costs-inequality. The detailed numbers simply provide another view in support of what Warshawsky states in the working paper, “Though rising healthcare costs eat away at wage growth for everyone, the effects will be largest for the working and middle classes because their healthcare costs are so large relative to the rest of their compensation package.”

In the rest of the paper, Warshawsky provides empirical evidence updates dating through 2014 using the same BLS approach as well as discussing supporting and conflicting studies. The conclusion is the same as the data above that cuts off in 2006, so I won’t drone on at length on it here. The policy implications are much the same as well – relief from healthcare coverage costs and decoupling health insurance from employer-based coverage, allowing American citizens to demand and receive higher wages with which they can then decide how to spend will do more for the lower and middle classes than any economically distorting wealth redistribution program.

One thought on “To reduce earnings inequality, we must first reduce healthcare insurance coverage costs”