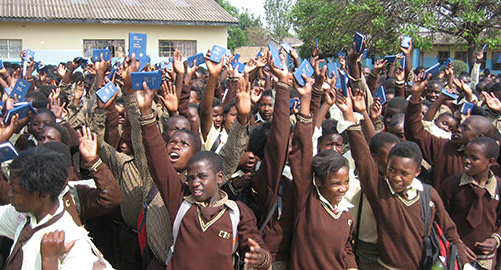 A recent Wall Street Journal article on the Gideons International reminded me of the special reverence and esteem I have always held for the organization. I can vividly recall Gideons showing up year after year at my rough and tumble lower class junior high school, patiently handing out their colorful mini Bibles to students that for the most part were either indifferent, walking past without looking up, or outright mocking. Still, these men would come back the next year to perform this duty. They were not there to preach or pass judgment, they were there with a simple mission to pass on the enduring legacy of handing out one of the oldest printed books known to man, a book that they believed held the most important lessons to the meaning of life.

A few years later, I would gain a better appreciation for the work of the Gideons. I was 17 years old and six days removed from high school graduation. I found myself in an overnight stay in Amarillo, Texas for final steps at the Military Entrance Processing Station prior to departure for basic training for the Army National Guard out in Fort Benning, Georgia. This was my first step in my military and college education journey, the two being inextricably linked in my life given that the military is how I paid for my undergraduate studies at Texas A&M and I spent four years as an Army officer after graduation. All that being said, a 17 year old spending his first true night alone knows nothing of what the future really holds and has a rather potentially toxic mixture of emotions of excitement and trepidation competing for outlets and attention. I recall that after a day spent at the processing station returning to my room to  discover that the man staying in my room, who must have shipped out that day en route to his own basic training for the Navy, had stolen the $100 I had in my bag meant to last me the couple of days in Amarillo. Lonely, broke, disabused of the naive notion that there would be nothing but honor amongst military men, and holed up in a shady motel on the remarkably dirty and seedy Amarillo Boulevard, I spent a bit of time reading the Gideon Bible in the drawer. The reading gave me a great sense of encouragement on my last evening as a free man. I can therefore say that the unglamourous and hidden work of the Gideons provided aid and comfort to me personally. I wonder how many others out there have found some comfort from a Gideon’s Bible in a time of dire need? Traveling on the road can be a remarkable experience for the clarity that it can provide an individual for deep thought and a forced time away from distractions. It is during those times that people can be prone to despair. Thus, the Gideons provide a remarkable service, even if it does not create the same level of fanfare as other forms of global missions.

My youthful crucible was by no means the last time I would have direct exposure to the work of the Gideons. Recently, and almost two decades after my hotel experience,  I had the pleasure of attending a morning Gideons meeting with my Grandfather’s chapter in the small farming community of Plainview, Texas. The event was simple enough: mostly middle-aged and older men meeting to eat breakfast burritos, drink coffee, talk about the weather, rib each other (as men age, I suppose that they never grow out of the boyhood tactics of questioning one another’s intelligence and/or manhood), and to discuss the business and financial matters of the chapter. True to the nature of the group’s mission, this was a group of men gathering to lift up their families, communities, the American nation, and the world up in prayer. Most importantly, this particular chapter was meeting to discuss their plans to provide weekly church service coverage for prisons throughout the surrounding area. Each week, the farmers, doctors, and retirees of this Gideon’s chapter go throughout the surrounding area to provide comfort and succor to those amongst us in most need of love and meaning. My grandfather is one who heads out to a prison on just about a weekly basis, providing an example of the dedication the Gideons have to God’s work that is safely out of the limelight, but directed at those most in need. Whether it is handing out Bibles to school students on the wrong side of town, placing Bibles in hotels, or ministering to locked up and forgotten prisoners, the Gideons do a lot of the work that remains firmly out of the public eye and directed at those most in need of reaching. This makes the Gideon’s hidden work all the more important and worthy of support from Christian communities.